Back in January 2009, I wrote a review of the Swedish film “Let the Right One In.” In the review, the first thing I wrote is “why you should watch it [the movie] now.”

My answer to that was because even then, the news was out that the movie would receive an American remake by the film director Mike Reeves of Cloverfield fame. A year and some months later and the trailer for that remake is here and posted below for your pleasure.

Like most film snobs, I was and still am a little apprehensive of an American remake of any foreign (or classic) film (and these days, I gotta add TV shows to that list). It just seems like the American way of doing/seeing things falls a little short of the original, especially when it comes to culture-oriented things.

With that said, this trailer actually intrigues. The movie, called “Let Me In” instead of “Let The Right One In,”  features Chloe “I’m Just Fuckin’ With Ya Daddy” Moretz of the Kick Ass movie franchise (a second movie is in talks to come out) as the exotic next-door neighbor with a blood-sucking secret and Kodi Smit-McPhee as the protagonist of the story. Smit-McPhee was last seen beside Viggo Mortensen in the movie “The Road.”

Although the trailer looks great it remains to be seen how the movie will stand up to the original. Reeves, in addition to directing the movie, wrote the screenplay for the remake so who knows what has remained and what has changed.


An early short film directed by Gus Van Sant — before Milk and Good Will Hunting, based on the short essay by William S. Burroughs, called “The Discipline of DE,”  from the Burroughs’ book, Exterminator!

The album is nominated in the Best Alternative Music Album category and running against It’s Blitz! by the Yeah Yeah Yeahs, Depeche Mode’s Sounds Of The Universe, David Byrne and Brian Eno (Everything That Happens Will Happen Today) and Death Cab For Cutie (The Open Door).

In October the band got together to film these three stripped down video concerts with the French website La Blogotheque [link]. Part 1 with the song “1901” is below; part 2 with “Lizstomania” and “One Time Too Many,” is here, and part 3 with “Long Distance Call” is here.

A silent film that was packed away in goodness knows where shows Marilyn Monroe sitting around with friends puffing away on a … spliff? Cigarette? I don’t know, you be the judge.

Lady Gaga, began her new tour in Montreal recently. She took a bit of a tumble on stage but her fans loved her nonetheless.

Before the fans, the peroxide, and the (maybe) nose job though, she was just Stefani Germanotta trying make a name for herself playing clubs and what not.

Watch this video of her playing at a NYU talent show in 2005, before she was Gaga. END_OF_DOCUMENT_TOKEN_TO_BE_REPLACED 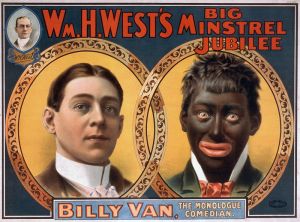 To don blackface now is generally considered in poor taste to most Americans, but that doesn’t mean people in other countries have figured that out. And in case you didn’t know, blackface is a theatrical act that was commonly used to portray Black Americans in an unflattering caricature that over-emphasized the darkness of our skin, the size of our lips, and the mannerisms of some in our culture when the practice of blackface first began.

The first incident that made national headlines is the now infamous Jackson 5 incident from the Australian variety show Hey, Hey It’s Saturday. Five men with their faces painted with black-as-midnight greasepaint did a serious, with no malice intended, meant to be taken humorously, imitation of the Jackson 5. One man in the group imitated Michael Jackson by painting his face as white as a cloud. The men called themselves the Jackson Jive. [link]

A week later, French Vogue, photographed the controversial model Lara Stone in blackface. ( She’s controversial because she’s a “curvy” size 4.) The magazine is no stranger to controversy though and has even been known to court controversy. In April 2009, the magazine raised eyebrows with its photo shoot featuring pregnant models smoking cigarettes. [link]

While the blackface photo shoot received outrage because of the use of blackface, outrage also existed because people were concerned about why more black models weren’t being used in fashion magazines. This was such a concern that this latter controversy concerning the use of black models in the fashion industry overtook the issue of the model being in blackface. [link]

So what’s the difference between the Jackson Jive incident and the French Vogue incident? Context.

Even though the Vogue model was painted in blackface, she was not “blackface.” She was not a black buffoon with overly exaggerated lips and skin as black as the midnight — another exaggeration, who was shucking and jiving like those people in the original blackface would have you believe that that is what “those people” [niggers, blacks, spooks, spear chuckers, porch monkeys] do.

She was elegant; and she was so elegant, people wanted to know why French Vogue didn’t use a real black model in the shoot.

However, the Jackson Jive was an image every black person has been working to distance themselves from since the invention of blackface.

The men acted like buffoons in black-as-midnight greasepaint. Although they were mocking a group, they did it using the natural skin color of the group. How often do we mock people based solely on their skin color? Customs? Sure. Religious practices? Yep. Skin color? Rare. (Sorry Albinos.)

For example, in Japan, it’s still common to see some blackface on TV. (The coloring is done in context.) Also consider that with Barack Obama being the first person of color in the White House, there will be those who don the paint in order to imitate him (and Michelle).

So what does this mean to the future of blackface? Well to use a turn of phrase that was also used in a movie that featured blackface: if you do go blackface, never go full blackface.

And for an example of context, look at this video of a Japanese Stevie Wonder impressionist. Can you see how he is working in context?

And look at this Louis Armstrong impressionist, do you think it’s the same? [link]

Well not really the final episode, although I’m sure some wished is was, but it is new.

This season’s Curb Your Enthusiasm, the comedy show that stars Larry David, featured a plot line that had David, who is also a former writer, co-creator, and executive producer of Seinfeld, bring together the Seinfeld cast for a reunion in order to win back his wife.

Queens and Bees
Blog at WordPress.com.